Socialist Party MEP, Joe Higgins spoke at a press conference yesterday launching the broad left “Vote No to Lisbon” Campaign (SayNo.ie, formerly Campaign Against the EU Constitution). Joe was intereviewed on RTE TV and radio about the launch of the campaign and why he will be campaigning against Lisbon. Listen to the interviews online by clicking here.

See the full press statement of from campiagn on their website here. Here we repost Joe’s comments from the press release. “The Lisbon Treaty enshrines as the norm the running of essential public services for profit, including health and education. If it is passed, the EU Commission would uphold the right of big business to profit from public services, over and above the rights of workers to take action to defend these services.

“Likewise, it would intervene to prevent even a mildly progressive government from investing to improve public services as this in their view ‘distorts the market’. This is a profoundly undemocratic document, which seeks to turn right-wing economic policies into the only show in town, and this at a time when the neo-liberal policies of privatisation and liberalisation have directly led to a catastrophic collapse in the living standards and conditions of working people.”

“EU commissioners, going back to Jacques Delors, have expressed their frustration at the EU’s relative lack of military capacity, especially when compared to the US. Economic power needs to be matched by military might in their view. We reject any notion that the role of US imperialism is something for working people in Europe to aspire to. By expanding the range of situations in which European troops can intervene militarily in Article 28B, Lisbon will represent another staging post towards Delors’ dream of a fighting force to, in his words, ‘fight the resource wars of the 21st century’.”

For more information on the arguments against the Lisbon treaty check out SayNo.ie, Joe’s article on the militarisation, and the privationsaiton agendas in the treaty.
Total
0
Shares
Share 0
Tweet 0
Pin it 0 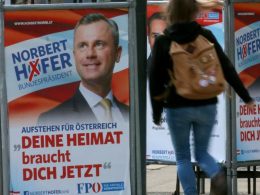 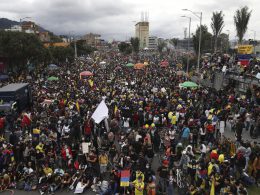 By Jonathan Diebold A tidal wave of protests and mass movements has been crashing over Latin America. Its…
bySocialist Party
1 share
1
0
0 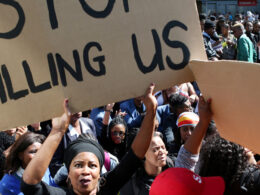