Don’t believe the lies! Electricians are saying that they are not prepared to be rolled over. They are willing to fight and should be supported by all organised workers and the unemployed. The “Race to the Bottom” must be stopped!

Across all sectors, public and private, employers are attacking workers wages and conditions. They are attempting to make all workers pay the price for the greed of the bankers, speculators and developers, both Irish and International. All workers face battles ahead to prevent huge cuts in their workplace conditions.

Employers are trying to use the recession as an excuse to drive down wages and conditions. Huge profits are still being made in construction. The companies who are building Landsdowne Road and the many other major multimillion euro projects around the country that were costed during the boom are simply trying to increase their profits at the expense of workers pay.

Members of the “National Electrical Contractors of Ireland” have been paraded on radio shows crying that the TEEU is “unrealistic” and “outdated”, that in “the real world” prices and rates are falling. The reality is that this group are undercutting each other with ridiculously low prices and will only succeed in driving each other out of business. Organised trade union labour should not let itself be dictated to by the cutthroat tactics of the market.

The media pundits have fallen into line by decrying the electricians for having the audacity to try to defend their living standards. Electricians have already suffered a pay pause, effectively a pay cut, and are now saying “enough is enough”.

The electricians REA is under attack. The Construction Industry Federation, under Tom Parlon, want to effect a 10% wage cut across the board and carry out attacks on all the present conditions of workers in the construction industry. The TEEU is conducting a defensive battle and should be supported by all workers in the industry. We must not let our industry and jobs go the same way as the Ferry workers and Airport workers whose jobs were sold down the river.

“The construction industry was at the heart of the massive rip off in society during the Celtic Tiger and are responsible for the collapse in the Irish economy. These people made hundreds of billions and landed working class people with massive mortgages and negative equity. It’s a disgrace that they are now pleading poverty and using the cover of the recession to pursue a race to the bottom.

I applaud the stand being taken by the electricians and call on all working people to give them support and solidarity in this important struggle.” Joe Higgins, MEP.

Defend the Registered Employment Agreement – For the Full Claim.

The Electrical Contractors Association (ECA) and the Association of Electrical Contractors Ireland (AECI) agreed with the union that they would pay an increase of €1.05 in April 2008. They subsequently reneged on this agreement. This Analogue Agreement is an integral part of the Registered Employment Agreement. This wage increase is calculated by comparing the wages of electricians in 16 companies, private and semi state, calculating the average increase and this becomes the pay increase awarded to the contracting electricians.

All the major building projects that are now been developed would have been priced in the expectation of increases of this magnitude happening during the lifetime of the project. The employers have pocketed the difference.

The union has conducted a similar comparison of these wages as of September 2008. This has yielded a figure of 6.2% increases paid to electricians working in the analogue companies. The employers associations refused to carry out any survey themselves and have stated that they want a 10% cut in Electricians basic pay. This is totally against the REA as it stands and flies in the face of their statement that they are in favour of the continuation of the agreement. Electricians have received no increase since April 2007.

Major ECA contracting companies have also carried out attacks on the basic standard conditions of electricians by the increased use of subcontractors that are not giving their employees their full entitlements. This includes employment of these workers on RCT1’s (C45’s), which is itself an illegal process, on wages way below the agreed rates.

On top of calls for a 10% wage cut the AECI has tabled demands for cuts in apprentice pay rates, cuts in country money, travelling time, overtime and shift rates and they want to employ unqualified workers to do electricians work at 25% below the rate.

One crucial element in this battle must be the full involvement of the membership in the planning and activities around this dispute. At present the strike is being organised and run by Head Office staff. The union should develop strike committees in all regions which bring together elected delegates from all major sites and all companies.

Electricians are skilled workers and deserve decent rates of pay and good conditions on the sites. We should accept no reduction in the pay and conditions set out in the REA.

What we have we hold!

The unions should be organising a defence of jobs, pay and conditions. Cutting jobs and wages is only making the crisis worse as it means working class people have less money to spend. There will be 500,000 on the dole by xmas and the government are planning billions more in cuts including in social welfare. Instead of billions in cuts the government should go after the massive wealth of big business and the rich. There should be no bailout of the banks and the developers. We need a political and trade union fightback to defend working class people – contact the Socialist Party today.

Electricians' Strike: 'Vital that all workers support this strike': 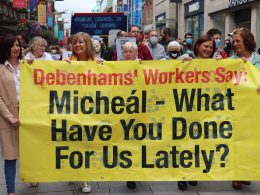 Debenhams workers’ struggle – an example to all