Joe Higgins MEP launches ‘No’ to Lisbon campaign in Strasbourg

Socialist Party promises a vigorous campaign in opposition to neo-liberal agenda represented by Lisbon. Speaking at a press conference in the European Parliament in Strasbourg, Joe Higgins launched the Socialist Party’s campaign against the Lisbon Treaty.

Socialist Party promises a vigorous campaign in opposition to neo-liberal agenda represented by Lisbon. Speaking at a press conference in the European Parliament in Strasbourg, Joe Higgins launched the Socialist Party’s campaign against the Lisbon Treaty.

“On 2 October, the Irish people are being obliged to vote again on a referendum on the Lisbon Treaty, having rejected this one year ago. Today, we give notice of our intention to wage a vigorous campaign of opposition to Lisbon.

“The agenda of the European establishment is very clear. All of the major political groupings together with the President of the European Parliament and the Swedish Presidency of the European Union have declared that implementing the Lisbon Treaty is their priority. They consider the Irish people’s opposition as an irritation to be bulldozed over with a combination of threats, misinformation and empty guarantees.

“The reason for their determination is that the Lisbon Treaty amounts to a vital next stage in the establishment’s project for Europe. Their vision is a Europe dominated by neo-liberal right-wing policies in the interests of big business. That means the privatisation of public services including health and education. It means a race to the bottom in workers’ rights, conditions and wages and it means a continued drive towards the militarisation of Europe.

“We in the Irish Socialist Party, as part of the Committee for a Workers’ International and the GUE/NGL group in the European Parliament are preparing now to fight this agenda in the second Lisbon Treaty referendum. I warn the establishment in Ireland and across Europe that they will be met by a very vigorous campaign of the Left in opposition to their agenda of a big business dominated Europe.

“We counterpose to the Lisbon Treaty a Europe run in the interests of the big majority, the working people, the unemployed and the poor of Europe where resources are democratically controlled in their interests, rather than deployed to satisfy the drive for super profits of the major corporations which has crashed the economy in Ireland with disastrous consequences and caused big problems for working people internationally.”

Electricians' Strike: 'Vital that all workers support this strike':

25 years ago: Liverpool - a city that dared to fight 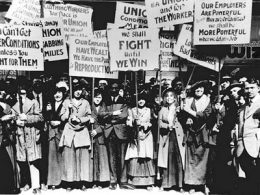 So, it turns out Bob Geldoff, Bono, and countless charity organisations have been wrong this whole time. Making poverty history doesn't require the generosity of all, just the mountains of cash hoarded by the top 100 richest people in the world.

Fine Gael and Labour have decided to maintain the cuts in the SNA sector that were initiated by Fianna Fail and the Greens.