THE EUROPEAN Election on 5 June is a brilliant opportunity for working people in Dublin to deliver a massive blow against the Fianna Fail/ Green Party government which is saddling them with savage burdens to pay for the crimes of the swindling speculators and big bankers.

THE EUROPEAN Election on 5 June is a brilliant opportunity for working people in Dublin to deliver a massive blow against the Fianna Fail/ Green Party government which is saddling them with savage burdens to pay for the crimes of the swindling speculators and big bankers.

Joe Higgins is standing in Dublin for the Socialist Party. By supporting him, voters could not find a more powerful way of delivering a hammer blow to the big business and political establishment. 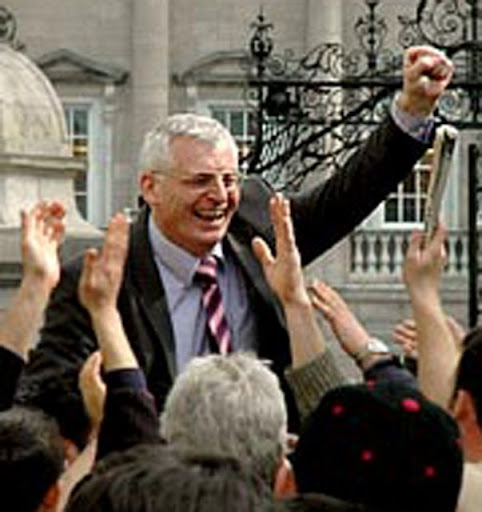 Joe Higgins has an unrivalled record as a fighter for working people. In the Dail from 1997 to 2007 he relentlessly exposed, and vehemently opposed, the speculation and profiteering in building land. He argued for a banking system and an economy run democratically by and for working people which would guarantee jobs, where all could afford a comfortable home and have a secure income and pension.

As a Councillor for twelve years, Joe Higgins led very important battles such as for the abolition of water charge in the 1990s and he relentlessly opposed the corrupt planning that was rife in Dublin at that time.

Joe Higgins played a leading role in opposing the Lisbon Treaty because it would facilitate further privatisation of crucial services like health and education, push the militarisation of the EU and arms spending and institutionalise the “race to the bottom”, in terms of workers’ pay and conditions. He is committed to doing the same when the government attempts to force this on the Irish people again this autumn.

If he were elected, Joe Higgins would do as he did during the ten years he was in the Dail, be a workers’ representative on a workers’ wage and will use the European Parliament to champion the rights of working class people. Vote No. 1 Joe Higgins on 5 June!

To help Joe’s campaign or to make a donation, go to

Comment: Establishment got Yes vote through falsehoods and lies

Even as the votes in the  Fiscal/Austerity Treaty Referendum were being counted, attention was already moving to the immediate and medium term future of the Eurozone and the fate of the millions of people in its economically beleaguered periphery. History may well show that the treaty itself was an almost irrelevant distraction from an honest appraisal of the cataclysmic problems that bedevil the currency union as all the contradictions in its economic and financial systems assert themselves with a vengeance.

Paul Murphy, members of the Socialist Party, and many more supporters of Paul’s work as an MEP have put in a huge effort to highlight crucial issues and to put Paul in the best position possible to retain the seat won by Joe Higgins in 2009, which Paul took over three years ago in March 2011.
bySocialist Party
Read More
12 minute read

Labour had a good day, but it's downhill from here