By Owen McCracken MANY TRANSLINK workers face an uncertain future after bosses refused to rule out job losses as part of a £11.5 million package of cuts to bus services in Northern Ireland.

MANY TRANSLINK workers face an uncertain future after bosses refused to rule out job losses as part of a £11.5 million package of cuts to bus services in Northern Ireland.

Several weeks have passed since the intentions of management were made public, yet the company has repeatedly refused to publish the full details of the proposed cuts, merely stating they are “keeping all matters under review”. The package is, however, likely to include job cuts, the closure of bus depots and the loss of vital bus routes to rural and outlying urban areas.

The real focus of workers’ anger should, however, be directed at the Assembly. It is the Minister for Regional Development, Sinn Fein’s Connor Murphy, who is forcing Translink to make up its £11.5 million budget shortfall. Murphy is also making Translink compete with private companies for the contract of running the new rapid transport system in Belfast.

Worryingly, his colleague in the Department of Education, Caitríona Ruane, is considering privatising the school bus service, which could cost a further 600 Translink drivers their jobs. It is important that Transport workers begin to prepare now to build a campaign of opposition to cuts and job losses. Strike action involving all bus workers would quickly reveal how dependent Northern Ireland is on public transport and would boost the case for a properly funded public transport system. 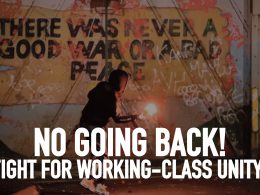 Socialist Party statement on the rioting in Belfast

No going back! Fight for working-class unity! Protests and rioting have taken place over recent days in Protestant…
bySocialist Party
7 shares
7
0
0

The political establishment have portrayed 2012 as somewhat of a turning point for Northern Ireland, with society moving beyond the old sectarian divisions – we have been told this is ‘our time, our place’. As if to mock the chic advertising campaigns, the dispute around the flying of the union flag at Belfast City Hall has demonstrated that this is a myth.