With Harland & Wolff just days from going into administration, placing 130 skilled jobs at risk, workers at the shipyard in Belfast – members of Unite and GMB trade unions – have begun an occupation, demanding that the government nationalise the yard to safeguard its future. It is imperative that the wider trade union movement and working-class communities rally behind these workers to defend jobs and skills at this iconic landmark for generations to come.

The Irish Congress of Trade Unions should immediately call a major demonstration in support of the Harland & Wolff workers’ demand, but also in support of civil servants, health workers and leisure centre staff fighting against low pay and attacks on terms and conditions, linking together all these struggles.

The recent announcement that the company was facing bankruptcy after its owners failed to reach a deal with their creditors created huge concern, not just among the workforce itself but across the wider community. The loss of more jobs and skills would be a serious blow. Belfast has had a shipbuilding industry for over four hundred years, with one of the best deep-water ports in the world and a first-class, skilled workforce.

No to loss of skills

If a buyer cannot be found, the logic of the capitalist market is that these highly skilled and unionised jobs will be lost. Northern Ireland has been trumpeted all around the world as the best place to invest in the UK because of our low-wage economy. Call centres and hospitality jobs dominate. Services account for about 80% of jobs here. These are overwhelmingly low-paid and precarious. They offer little in the way of long-term, stable employment. The loss of skilled jobs in the shipyard will be felt by the current workers immediately and for generations to come.

Capitalism has no solution to manufacturing crisis

The shipyard has been in crisis for the last few years, seeing a drop in profitability. Turnover slid from from £67 million in 2015 to £8 million in 2016. The workforce has been continually cut. The shipyard has turned from building ships to repairing them, and also building offshore wind turbines and projects connected to offshore oil and gas drilling.

The threat to the shipyard is unfortunately not the first of its kind in recent years. We have seen the closure of the JTI Gallaghers and Michelin plants which dealt a devastating blow to working-class communities in Ballymena. Local politicians have been ineffectual in any attempts to preserve jobs. They base themselves upon a low-wage, neo-liberal outlook, looking to court foreign direct investment. As such, they offer no strategy for retaining skilled work here. They accept the logic of the capitalist market and therefore have no solution when confronted with its limitations.

Unite the Union has correctly demanded nationalisation from the outset of this threat. Susan Fitzgerald, Socialist Party member and Unite official, put it succinctly: “Harland & Wolff has the largest dry dock in the UK, it is the envy of shipyards across Europe and the UK government must look at nationalising the yard to protect the skills that exist today in Harland & Wolff for the future.”

Nationalisation should not be a sticking plaster to tide things over until a new buyer is found. To safeguard skills and also to develop an economy that is geared towards the needs of the majority, it is necessary for the shipyard to be nationalised and brought under democratic control permanently, not returned to the hands of private companies whose only concern is their profit margins. The bosses are driven by short-term, immediate profitability, they are unable to plan and develop industry in any sustainable way.

Fight for every job

The only force that can save the shipyard is the working class. We cannot rely upon politicians who have offered no way forward before, nor the employers who have ran the shipyards into the ground. The Clydeside Ferguson shipyard is being considered for nationalisation by the SNP in Scotland to protect jobs after huge pressure from workers. Nationalisation and the protection of jobs in the long-term can be won only on the basis of serious and sustained struggle by workers and local communities.

The recent election of Boris Johnson as Tory leader and new Prime Minister will mean a continuation of the Tories’ attacks on working-class people if he gets his way. However, he has not came to power in a position of strength. His government is weak and divided. A serious mobilisation of the trade union movement could wrest significant concessions.

United struggle for the future

Loss of more unionised, skilled jobs would be a further blow to the future of our young people. A linking up of young people fighting for their future with workers struggling to defend their jobs is possible. We must utilise the skills in the shipyard for the production of renewable energy equipment to assist in the transition towards a green economy that meets the needs of people and planet, not the billionaire class.

Above all, the inability of capitalism to meet the needs of people – whether in providing decent employment, housing or ensuring the sustainability of the planet – is painfully evident. There are massive resources in our society, with trillions internationally sitting uninvested while workers are left struggling. This wealth and the skills of working people should be used to in a planned and democratic way to benefit all. We need a socialist economy, run to meet need, not to create profit for a few.

When the North exploded: 50 years since the "Battle of the Bogside"

US: Importance of the Kshama Sawant Re-Election Campaign

To mark the second anniversary of the death of Peter Hadden, leading member of the Socialist Party and the Committee for a Workers' International we are reprinting this eulogy to our beloved comrade. 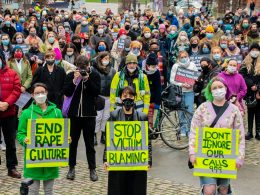