Friday, 9 November saw one of the largest general strikes in Greece of the last few years, and according to most, the largest of the last decade at least. ADEDY (Supreme Administration of Greek Civil Servants Trade Union) in their statement describe the 24-hour general strike of last week as a ‘watershed strike’ not only due to the numbers that participated in the strike and marches all over Greece but because it is perceived as the start of the escalation of mobilisations (that began in September) against governmental policies.

One of the central demands of Greek workers is the increase in wages that would be at least corresponding to the rise of inflation. Inflation in Greece for the month of October was estimated at 9.2% with consumer price inflation reaching as high as 12%. And this comes as hundreds of thousands of households find themselves unable to afford the most basic of needs like food, housing, and heating. According to the NIkos Poulantzas Research Institute, 72% of workers claim they cannot afford everyday needs on their employment income alone.

Kyriakos Mitsotakis’ government has consistently implemented criminally anti-worker policies not only devastating workers’ wages and work conditions but invariably squeezing democratic rights; the right to protest, strike and even participate in trade union activities. Last week’s protests and general strike constitute a very loud -yet initial — message to the government that people cannot any longer accept their policies.

Unfortunately, it is very difficult to calculate how many people participated in the marches organised by trade unions and left-wing parties all over Greece as there are no official figures and the establishment media seem to focus either on the fact that there was no public transport as the strike action managed to bring the entire country to a standstill or episodes perceived to be caused by protestors. However, all alternative media sources agree that participation was mass, vibrant and militant; a very significant message to a government that is losing whatever is left of their popularity and is walking on thin ice, especially as details of the biggest phone tapping scandal are unfolding. 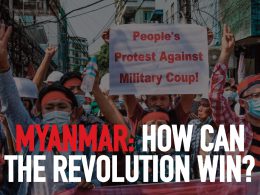 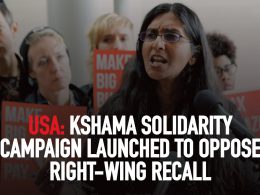 Article by a member of Socialist Alternative, our sister organisation in the US, about attempts by big business…
bySocialist Party

Workers in struggle and discussions with the Greek left