With the announcement that Kamala Harris is to be the running mate of Democratic presidential candidate, Joe Biden, many people are wondering who Harris is and what she represents. We publish here an article by Socialist Alternative (sister organisation of the Socialist Party in the US), written during Harris’ unsuccessful Democratic primary campaign.

Following the explosion in popularity of Bernie Sanders’ candidacy and program during the 2016 Democratic primary, the Democratic party establishment is on an all-out campaign for anyone but Bernie in 2020. With months to go before the first primary, Joe Biden has a big lead in the polls, but Kamala Harris stands out as a skilled debater who saw a 4% bump in her poll numbers after calling out Joe Biden in the first debate for praising segregationists and opposing busing to desegregate schools.

Harris, current Senator and former California Attorney General, is a prime contender with a long history of advancing establishment interests. From protecting Wall Street bankers from prosecution during the foreclosure crisis to threatening California parents with prosecution for their children’s truancy, Harris’ attempts to seem like an anti-establishment fighter for equality are at odds with her real record.

In Kamala Harris’ two terms as California’s “top cop,” — to use her own words — she amassed a record that was largely consistent with the ruling class’ policies of promoting mass incarceration. Harris championed some minor criminal justice reform initiatives, but she didn’t attempt any serious shift in policy. In numerous examples detailed by law professor Lara Bazelon, Harris’ office worked to keep innocent people in jail. In the case of Daniel Larsen, a man who spent nine years in prison before the Innocence Project got his conviction overturned, the attorney general’s office opposed his release because paperwork was turned in after a deadline. A judge ordered Mr. Larsen’s release but other innocent individuals were not so fortunate.

With California’s prison system under court order to reduce overcrowding, the attorney general’s office under Harris opposed an early release program on the basis that releasing inmates early would deprive the state of incarcerated workers making slavery wages as low as $2 a day to fight wildfires. Harris later disavowed the argument, but there was no broad effort on her part to reform the viciously racist system of mass incarceration in her time as the attorney general.

Harris got her start in politics when she was elected San Francisco District Attorney in 1997. One of her initiatives in San Francisco was a program designed to increase school attendance by threatening to arrest and prosecute parents whose kids were truant. In a recent interview, Harris downplayed the program, claiming that she never intended to prosecute parents.

Harris was challenged on this record by Tulsi Gabbard in the latest Democratic Party debate and even mainstream media accepts that Harris had no substantive response. She chalked these criticisms up to herself being a “top tier candidate” and Tulsi Gabbard just trying to “make the stage for the next debate.”

Since Kamala Harris was first elected attorney general in California, consciousness among working people has shifted to the left on many issues, influenced by the movement to win a $15 minimum wage, the Black Lives Matter movement and Bernie Sanders’ 2016 campaign to name a few factors. Harris’ campaign materials show she’s trying to relate to the new consciousness and she has just come out with her own Medicare-for-All plan which puts forward a compromise with big business. Rather than eliminate private insurers the way Bernie Sanders’ plan would, her plan not only preserves but expands insurance companies’ role in Medicare. Corporations are insatiable when it comes to profit. A hybrid public-private Medicare-for-All plan will leave the door open for attacks on the public system to make private insurance more and more attractive to those who can afford it.

A student debt relief scheme that appeared on Harris’ Twitter feed is laughably inadequate, impacting only Pell grant recipients who manage to run a successful business for three years in low income communities. It will take a much more serious approach to the $1.5 trillion in student debt to win votes from most young working and middle class people who are burdened by student loans.

How to Talk Left without Moving

Harris, and the Democratic party establishment in general, have a problem. How do they relate to the millions of people who were politicized around Bernie’s 2016 program, the 64% of Democratic voters who want Medicare-for-All that replaces private insurance, the 63% of Americans who want the Green New Deal, and simultaneously do the bidding of their corporate donors?

Like many of the Democratic presidential candidates, Kamala Harris has announced that she’ll reject corporate PAC money, but she has accepted substantial donations from corporate lobbyists, despite, at times, claiming that she would reject such money. 56% of the money Harris has received has come from big individual donors and Harris is leading the Democratic contenders in money raised from the Clinton network of “bundlers,” or individuals who fundraise mainly among wealthy people. Candidates sometimes disclose some information on their bundled donations, but disclosure is not required by law. Harris has not sworn off the rich and super rich who have supported her in the past, and she’s been busy courting new corporate donors since well before she declared for the presidential race.

The Kamala Harris campaign accepts that it will be necessary to put forward policies that includes real reforms to the criminal justice system, healthcare, and higher education in order to become the Democratic party nominee. However, most of her plans are woefully inadequate, and considering her donor base and track record as an establishment figure, she can’t be trusted to carry out major reforms to, for example, the multi-billion dollar health care industry. It will take much more than Harris’ trademark verbal skills to unseat the powerful corporate interests who are responsible for the increasingly barbaric conditions of life for poor and working people in this country. Kamala Harris has given no indication that she will oppose the rule of the corporations, much less build the movement that will be necessary to put working people’s needs first.

In recent weeks and under much fanfare the government has launched a new scheme to create 5,000 internships by pairing applicants with a large number of participating companies, including KPMG, Tesco, Aer Lingus, Glanbia, Quinn Group Ltd, HP, ESB, Pricewaterhouse Coopers and Bord na Móna.

THE HERALDED “change” from Bush’s foreign policy which Obama supposedly represents, is increasingly looking like a simple shift in geographical focus. The tactics used in Iraq – bribing past opponents and using a surge of military force – are to be employed in the coming months in Afghanistan. The justification is also largely similar to the rhetoric of Bush – a war against “terrorism” that knows no borders. 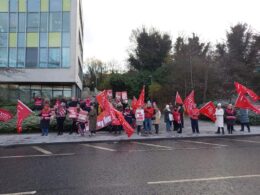 Pieta House, an organisation dealing with prevention of suicide and selfharm, is reporting an increase in the numbers of, particularly young, people, who are considering suicide in the context of the economic crisis.