The Right to Work campaign is centred around the need for asylum seekers to be able to access the workforce, free of discrimination and against the insurmountable barriers the Irish State has laid down in opposition.

The campaign, led by asylum seekers themselves and those most affected by the state-sanctioned racism that the Direct Provision (DP) system represents, was launched in June at a rally in Liberty Hall.

The initial focus of the group will be to apply political pressure on the government to provide open access to the labour market for asylum seekers prior to the publication of the government’s terms of reference towards the “EU Directive On Reception Conditions” due shortly.

The group has pledged that if the conditions are unacceptable, the campaign will continue to build with the ultimate aim of ending the brutal DP system.

An end to DP and the fight for a living wage and proper working conditions for all workers, regardless of their residency status, is a fight that the trade union movement have a crucial role to play in.

With many people taking aim at the general backwardness and social inequality which dominates the political system, this campaign reflects a part of a growing section young people, LGBTQ+, women and migrant people who have found a sense of strength in grassroots activism and the power of social movements to deliver real change.

One year of Varadkar's spin & neo-liberalism 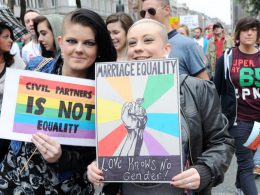 As if JobBridge wasn’t bad enough, the government will this year start to roll out their Gateway scheme and hope to have it fully operational by next year.
bySocialist Party
Read More
3 minute read