Today’s ruling is further proof that the judiciary in the final analysis contains an inherent bias against the interests of working people. Employers have allies in the top echelons of the state who are prepared to strike down the legal underpinning of conditions in the private sector that exceed the statutory minimum wage.

I and my party will study the judgement closely but a number of points need to be immediately injected into the debate. Firstly this ruling does not automatically empower employers to tear up existing contracts of workers where REAs have been observed. Any amendment to existing contracts requires the consent of workers. Doubtlessly pressure will come from employers across the board on workers to agree to such changes or face redundancy.

Secondly we might anticipate attempts by employers to wind up pension schemes and even attempts to claw back employer pension contributions from schemes that were underpinned by REAs.

Thirdly, it has to be acknowledged that the REAs were being widely flouted in any case by employers. The six monthly reports that the National Employment Rights Authority have produced since that agency came into being in the aftermath of the GAMA scandal demonstrated high levels of non compliance of REAs uncovered in the workplaces inspected by them.

Issues of non compliance on REAs, employer pension contributions and bogus self employment have even been brought to my offices attention in recent times on building sites of state funded projects. Ministers including Minister Quinn has been made aware of this fact on school projects his department has funded and he has done nothing to address the situation.

All of this leads us to the conclusion that while it is correct for the trade union movement and the left to struggle for every possible legal enhancement and underpinning for workers’ rights and conditions in the end it is what is achieved by trade union organisation in the workplace that counts from the point of view of obtaining the best conditions possible and safeguarding them. Any illusions on the part of elements of the trade union leadership that employment law can do the job of the unions, needs to be utterly dispensed with.

I welcome particularly the response of UNITE the trade union to the ruling where they fully acknowledge that we are in new territory now where it is essentially a straight fight between unions and employers with no basis for state backed arbitration. The task now posed for the trade union movement is a concerted drive to better and more fully organise those sectors which were covered by the REAs and to prepare a campaign to win and maintain the conditions that the employers have tried to dismantle.

The court room is their chosen battlefield, the battlefield of the trade union movement is the workplace, building site and the street.

Finally this is another acid test for the Labour Party, as if they needed further exposure in their betrayal of the people who voted for them. Will they insist on the introduction of fresh legislation to restore the REAs or even initiate a referendum to alter the constitution if that is required required? We should of course demand this but by no means hold our breath because what is necessary now is a revival of the methods of Larkin and Connolly to defend workers’ rights

Socialist Party statement on bill to criminalise the purchase of sex

No Compromises – SCRAP the pension levy

FOLLOWING ON from our demonstration of 4,000 people outside Dail Eireann on the 18 February, CPSU members took part in a one-day strike on 26 February. This protest and one day strike were in reaction to the pay cuts (pension levy) being imposed by the government.

The strike had the overwhelming support of other public servants. Even though they were threatened with disciplinary action, many public servants refused to pass the picket and in some cases joined our picket lines with their home made placards. On the day there was almost universal agreement amongst all grades that our unions needed to take co-ordinated and united action against the pension levy. 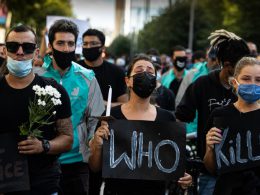 Solidarity with the family of Thiago Cortes & all Deliveroo workers

On Tuesday night the death was announced of Thiago Cortes, a Deliveroo worker who was killed in a…
bySocialist Party
12 shares
12
0
0