All of the wealth that exists in society is produced by workers, the vast majority of people. The vast majority of that wealth is owned by capitalists, a tiny minority of people. They also own all of the establishment parties, the courts and the media and they use these means to justify and defend a system that is based on the rich stealing from the poor. The €70+billion  bank bailout is an extreme example of what capitalism is.

This Government is continuing to implement the cuts and bailouts, which have made and will make the crisis worse. Mass unemployment exists because those who have the wealth will not invest as they can’t be sure of their profit margin. Physical investment has declined by a massive 31% in the last year alone. Under this system where profit, not society’s needs are the motivating force, there is no hope for a decent future.

3) There is no environmental crisis and the planet is fine

Capitalism not only destroys lives but the environment too. The BP oil spill and the nuclear disaster in Fukushima are just two recent examples of how big business is destroying our planet for their profit.  Big business polluters are the ones responsible for climate change and are stopping the needed investment in renewable technologies.

The idea that things have always been this way and nothing will ever change is false. The capitalist system has not always existed and it itself was brought about through revolutions. Workers and young people across the world, united, are potentially the most powerful force in society and can bring about change. The revolution in the Arab world is just the most recent example of this power.

Only on the basis of a socialist planned economy can we tackle the massive issues we face and provide a future for young people in Ireland and across the world. We need planned investment in jobs, education, renewable energies, research and development etc. This cannot be done on the basis of an anarchic capitalist market. We need to change society fundamentally so that the massive wealth that exists is used for the benefit of all, not the profits of a few.

€nough! Referendum campaign: How can we defeat austerity?

FIght the Under 20’s dole cut!

THE SLASHING of the dole for under 20s to a miserable €100 a week is scandalous. How is anyone meant to survive on €100 a week? It just isn’t possible and on top of this rent allowance is also being cut. This vicious cutback sums up what this government thinks of young people and it is a warning to all workers and unemployed that all social welfare payments are now under the threat of being cut.

Monika Janas, interviewed Paul Murphy, Socialist Party MEP for Dublin on the stance he has taken against JobBridge exploitation and youth unemployment. 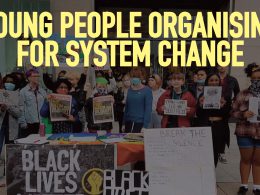 The German federal government attempted to prevent protests developing there just before the international day of action against “ACTA” on 11 February. They publicly announced that they will not sign the ACTA agreement, but will re-examine it.