Socialist Party councillor Mick Barry this morning (Thursday 4 June) called on voters to double the Socialist Party representation in Cork City Council and to “wipe out” Fianna Fail in tomorrow’s elections.
Cllr Barry is standing for re-election in Cork North Central and his party colleague Dave Keating is seeking election in the Cork North East ward.
Cllr Barry said:  “I am calling for a massive turnout tomorrow to wipe out Fianna Fail.  But it is very important that genuine fighters for working class people are well represented on the Council and a doubling of Socialist Party representation would be an important step forward.”
The Socialist Party may be set to make important breakthroughs in this election with Joe Higgins very much in the race to win a European seat in the Dublin constituency.
Cllr Barry, who has led and organised a “people power” campaign to save the number 12 bus service in the midst of his re-election campaign, said:  “Unlike others, Socialist Party candidates will not criticise Fianna Fail in the middle of an election then go down to City Hall to join hands with them and vote for cuts in jobs and services.  Socialist Party councillors will not soften their coughs and will staunchly defend the interests of working class people on the Council.  Our message is: get out and vote for real fighters tomorrow.” 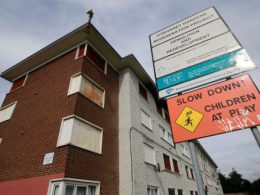 As Labour top the polls, we examine Labour’s record in power