THIS DEAL has set the benchmark for dozens of other sites throughout Britain and in fact throughout Europe. This heroic struggle by 1,000 plus construction engineers in the refinery (supported by walk-outs in 20 plus other sites as well) who were working on different contracts throughout the site in north Lincolnshire has resulted in a victory for the workers.

bySocialist Party
6 minute read
Total
0
Shares
0
0
0
[author image=”http://socialistparty.ie/wp-content/uploads/2009/10/bill-mullins.jpg” ]Bill Mullins is a member of the Socialist Party of England and Wales (part of the CWI) and a former industrial organiser.[/author]

THIS DEAL has set the benchmark for dozens of other sites throughout Britain and in fact throughout Europe. This heroic struggle by 1,000 plus construction engineers in the refinery (supported by walk-outs in 20 plus other sites as well) who were working on different contracts throughout the site in north Lincolnshire has resulted in a victory for the workers.

It was a victory against the bosses of Total (the French oil company that owns the site) but also against the whole neoliberal regime that operates across the EU. In the process, it exposed the anti-union laws as irrelevant when the mass of workers move into struggle.

The workers have been guaranteed 102 of the 198 jobs that are available in that part of the contract inside the refinery that was building a new chemical facility (HDS3).

The original contractor Shaw’s, had been told that they had lost part of the work to an Italian company, IREM, who would bring in their own workforce from Italy and elsewhere to do the job. As a result Shaw’s had told the shop stewards on the site that some of their members would be made redundant from 17 February to make way for the Italian workers.

What was crucial in this was not the fact that they were Italian or Portuguese but that they would not be part of the “national agreement for the engineering and construction industry (NAECCI)”. Why? Because under the EU directives, backed up by the European Court of Human Rights, this would be seen as a “restraint on trade” and therefore against the freedom of movement of labour and capital enshrined in the EU capitalist club’s rules and regulations. It does not take a rocket scientist to work out that this is a bosses’ charter and nothing else.

Role of the media

The press gave prominence to the slogan used by some workers of “British jobs for British workers”, held up by some of the strikers at the mass meetings. It failed to see (and how could you expect the rabid capitalist press to do anything else) that the strikers’ case was simple. That was that they were being excluded from jobs on the site by the sleight of hand of the bosses under the cover of “the right of labour and capital to be shifted without restriction to any part of the EU.”

No workers’ movement is “chemically pure”. Elements of confusion, and even some reactionary ideas, can exist, and have done in these strikes. However, fundamentally this struggle is aimed against the race to the bottom, at maintaining trade union-organised conditions and wages on these huge building sites.

The existing one-sided EU laws and directives give the bosses complete carte blanche to bring in workers to work on less pay and worse conditions in the “host country” as long as the minimum conditions of their home country is applied. They do not have to be in a union and it was clear that the IREM workers were not in a union, Italian or otherwise.

But the struggle was more even than this. It was a struggle for control of the workplace by the workers themselves. If the Total managers, as owners of the site, and the Italian contractors IREM could have had their way, they would have driven a huge wedge into these elements of workers’ control that had been wrested from the management on the site over the whole previous period.

As part of the deal and in a major breakthrough, it allows for the shop stewards to check that the jobs filled by the Italian and Portuguese workers are on the same conditions as the local workers covered by the NAECI agreement.

This was a fundamental demand of the strikers when they adopted a central list of demands at the mass meetings including “all workers in UK to be covered by NAECI Agreement and all immigrant labour to be unionised.”

As an extra safeguard to maintaining trade union organisation in the sites the strikers also accepted a demand put forward by the strike committee of the need for “Union-controlled registering of unemployed and local skilled union members”.

This is exactly what the capitalists do not want and from their point of view, it is indeed a “restraint on trade”, i.e. their right to exploit their workforce without the union having any say in it.

In the 1970s, some of the best organised workplaces were in effect closed shops, either pre-entry or post-entry. What the Lindsey strikers are demanding quite correctly is a form of pre-entry closed shop. That means that if the contractors on site need more labour then they have to go to the union for this labour from its unemployed register. In other words you have to be in the union to be on the register.

The alternative to trade union control over “hire and fire” is the bosses having that right instead and who will they give jobs to? Not the trade union activists, as is too often the case a bosses’ black-list is widely used in the industry. The fight for this demand to be put into practice will be part of the ongoing struggle between the workers and the bosses for who controls the workplace and, therefore, in whose interests will the workplace be run.

To their shame some on the left were completely taken in by the headlines in the capitalist press which highlighted the “British jobs for British workers” elements of this struggle. What they did not realise or refused to face up to was that the whole previous period had led to this battle. What was new in the equation was the rapid onset of mass unemployment threatening every worker in Britain and across much of the globe.

The trade unions were preparing through the shop stewards organising on a national level to take the bosses on. But the whole thing was precipitated suddenly when Total gave the contract to IREM before Christmas. The timing of this was not an accident. The Total bosses were using the downturn in the economy to give the work to a contractor who did not have to bother with trade unions as most of the British contractors on these major building project were forced to do under normal circumstances.

The strike has struck a blow against the race to the bottom. What it opens up now is the need for much more coordination amongst all the European unions and particularly the shop stewards organisations, at site level but also at national and indeed on an all-European level as well to come together in a massive campaign to spread the victory of the Lindsey oil refinery workers across the whole country and the EU.

THE MISREPRESENTATION of the strike in the media caused a reaction amongst the strikers who made clear in interviews and conversation that the strike was not racist or against migrant labour but against the exclusion of UK labour and against the undermining of the national agreement. The BNP contrary, to media reports, was not welcome on the picket line

Plus the active intervention of the Socialist Party. SP member Keith Gibson, who was not a steward, was elected onto the strike committee and as the workers’ spokesperson.

The Socialist Party distributed nearly 1,000 leaflets to strikers which stated that the strike was not against foreign labour but to stop the race to the bottom, and  that “Trade Union jobs, pay and conditions for all workers” should be the slogan. Also proposed a clear set of demands which Keith got adopted by the strike committee and was carried at a mass meeting. Keith’s speeches always emphasised the common interests of all workers against the bosses.

Twenty four hours later although still a couple of union jack flags, all the “British Jobs for British Workers” posters had gone. In their place were placards in Italian appealing to the Italian workers to join the strike and another “Workers of the World Unite.”

What this shows is the mixed consciousness that exists and the effect that the conscious intervention of socialists can have in bringing forward class demands and pushing back any reactionary ideas that exist as a result of  years of  little struggle and absence of class politics.

Ultra-left critics of the strike never engaged in discussion with the workers. They preferred to believe the capitalist press and so dismissed the strike as reactionary, racist or xenophobic. If the Socialist Party had not intervened there are dangers that such attitudes could have strengthened, instead a marvellous victory has been achieved that lays the basis for unionising the foreign workers and strengthening class unity.

Responding to the e mail sent by SIPTU to its members recommending a vote for the Labour Party and a vague call for transfers to unnamed parties who support 'social solidarity' Joe Higgins, Socialist Party MEP and candidate for Dublin West said:
bySocialist Party
Read More
2 minute read 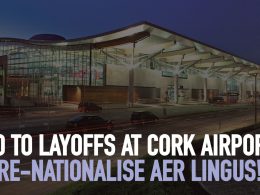