The trade union leaders have been giving credibility and cover to the property tax. While most unions opposed the household charge as it was a flat rate, few have yet come out against the property tax, despite it being much more onerous — the  equivalent of a week’s salary for some workers.

One of the main blocks is that the the ICTU  leaders are supportive of Labour and its participation in government. They don’t want to criticise their disgraceful actions in carrying on the bailout-austerity policy.

There is an argument over whether property taxes can be ‘progressive’ and ‘broaden the tax base’, but this is not a real property tax, going after the property, wealth or assets of the better-off in society. Even the ‘mansion tax’ argued for by Labour was a farce, only rising to 0.2% after the €1million euro mark.

This is a blatant tax on your house or apartment, with no ability to pay factored in. It completely ignores, of course, the massive problem of negative equity and mortgage arrears being faced by many young workers. This tax hits the low and middle income workers.

`Members of unions should try to pass motions of opposition in branches and at union conferences. It would give confidence to workers everywhere to have union policy against the tax.

Workers should try to have discussions or meetings at workplace level to discuss sending in letters or petitions to their union officials calling for opposition and action against the tax.

If the government instruct Revenue to carry out deductions of the tax from wages and welfare, this should be the signal for unions to take action, at local or national level. A one day general strike against the tax and austerity would, of course, be a big blow. But individual unions can take independent action against the tax, for example, telling management there will be work stoppages or work-to-rule action if the tax is deducted.

Payroll workers should not be put in the invidious position of deducting this tax. Many may not be in unions. But larger workplaces, for example, the ESB, the post office, public sector and large private sector companies can exert major pressure.

The ICTU leaders have called a series of demonstrations on Feb 9th. This is to be welcomed, but it must be more than token.

The instances of neglect and maltreatment and the facts around the shoddy inspection regime that current exists are now well documented in the press and media.

Only Labour can deliver real change! That's the message on leaflets dropping into homes around the country. One recent opinion poll gave Labour 32% of the vote, indicating that they could become the biggest party in the state. 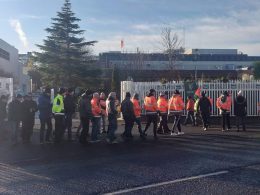